Watch Monster Buster Club full episode online free watchcartoononline.
Storyline: Monster Buster Club is about three twelve-year-olds, helped by an alien girl named Cathy, who are all charged with saving their town from alien invasions. With her grandfather, they reform a secret organization that was founded centuries ago called the Monster Buster Club, often abbreviated to MBC. The goal of the MBC is to locate alien criminals seeking refuge in Single Town, capture them, and send them to galactic authorities. 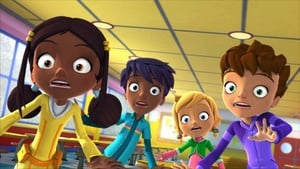