AnimationFamilyScience Fiction
what going on?

Watch Thru the Moebius Strip (2005) full episodes online free watchcartoononline.
Synopsis: Physicist Simon Weir invents a portal that can in theory take people to unimaginably distant locations millions of light years away. He tests the portal and never returns. Everyone believe he’s dead and the portal is forgotten. His son Jac however does not believe this. When he’s 14, he finds his father’s portal and decides to go after his dad. He emerges on a strange alien planet of giants, who follow a code of honor similar to Earth’s medieval chivalry. Jac meets some friendly locals and finds out that his father is still alive, but imprisoned. The aliens make no distinction between technology and magic, so Jac plans to use this to rescue his dad. What he doesn’t realize is that stakes are much hire than that. 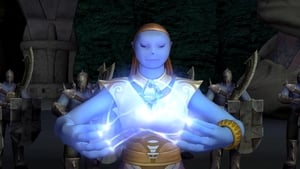