Watch Noah’s Ark (1959) full episodes online free watchcartoononline.
Synopsis: Noah gets the word: build an ark in seven days. His sons cut the necessary trees in three days, and much furious sawing and hammering follows. But there’s no rest, as they need to round up all the animals. Noah boards the animals, then his sons, their wives, and his wife (who packed a ferocious picnic). The rains and flood begin. The animals soon develop cabin fever and get restless, but Mrs. Noah has the answer: “Music has charms to soothe the savage beast.” His sons find instruments and begin playing; everyone dances. But Harry the hippo dances with everyone but his wife; Noah goes to her, and while she tells him not to mention Harry’s name, Noah convinces her that Harry is thinking only of her. The rains end; Noah sends a dove out who brings back an olive branch. They land on Mount Ararat and disembark. 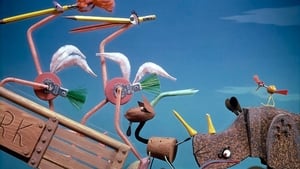