Dinotopia: Quest for the Ruby Sunstone (2005)

FamilyFantasyScience Fiction
what going on?

Watch Dinotopia: Quest for the Ruby Sunstone (2005) full episodes online free watchcartoononline.
Synopsis: Experience the Magic of Dinotopia in an All-New Animated Movie! 26, the beloved young dinosaur from the hit miniseries, stars in an all-new animated movie set on the island where humans and dinosaurs co-exist. Twelve-year-old orphan Kex stows away in a lifeboat, hoping to see the world, but after being washed overboard he finds himself on Dinotopia, befriended by 26. Soon, the friends face trouble when the evil Ogthar is released from his stone prison and recovers the Ruby Sunstone, whose dark power can endanger all of Dinotopia. Join 26, Kex and the other dinosaurs as they fight to save their magical home! 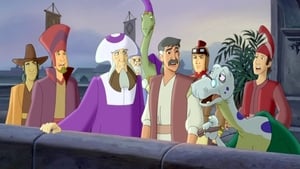